Loy Krathong is a time to forgive, forget and literally launch fresh hopes into the universe. Along with the related Yi Peng events up north, the festival is celebrated across Thailand with no shortage of booze and fireworks to accompany candlelit lanterns floating on water and in the sky. Observed on the full moon of the 12th lunar month, 2016's "Festival of Light" falls November 14 to 16. With the death of King Bhumibol Adulyadej, celebrations this year will still take place, but are likely to be more sombre.

Background
Loy Krathong is rooted in a deep pool of animist beliefs, Theravada Buddhist tradition and early Thai-Lao-Shan history. The most popular legend stars Nang Nopphamat, a beautiful woman thought to have lived during the Sukhothai-era around the 14th century. In a successful attempt to attract King Ramkamhaeng's attention, she crafted a lotus-shaped offering with a candle and intricate fruit carvings, among other colourful bits, and floated it downriver. Hence the krathong was born. 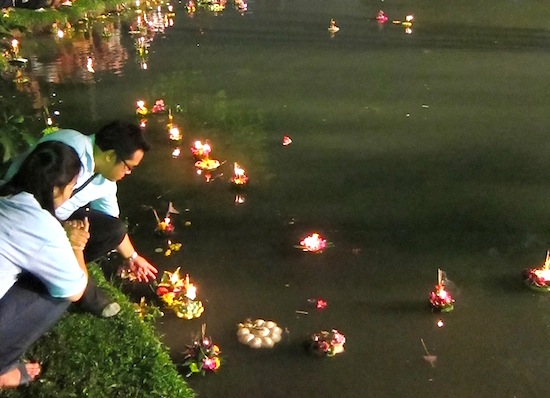 Just how Nopphamat would have done it.

As the story goes, the devoutly Buddhist king was so captivated that he established a holiday to honour the Buddha on a night when rivers and canals swell and moonlight blankets the sky. This is probably a tall tale crafted by King Rama IV in the 1800s, but that hasn't stopped millions of Thais from creating Nopphamat's signature offerings and competing in beauty contests that often bear her name.

Some say the festival is rooted in ancient Hindu ritual, while many feel it honours the magical naga serpents that are so pivotal to countless Southeast Asian legends. An especially popular belief holds that Loy Krathong is a form of devotion to Phra Mae Kongka, the Thai version of Ganga, Hindu goddess of water. In any case, Loy Krathong is clearly associated with water and its purifying power. Many beautiful moments during Loy Krathong.

Thais view the festival as an opportunity to free themselves of bad luck; to start afresh and establish new hopes and priorities. In this way it's reminiscent of New Year's Eve in the West. Reflecting on mistakes and grudges -- allowing them to float away and be replaced by new hope -- makes Loy Krathong a moving event for many. Also echoing the Western New Year, it's simply an excuse to party for others.

Krathong
The floating offerings known as krathong were traditionally crafted from pieces of banana tree trunks, spider lily plants or coconuts. While all of these remain popular, today they're often made from bread that serves as an offering to the local fishes as well as the river goddess. Some krathong are made from styrofoam, a practice that's frowned on due to the obvious pollution. There's no limit to how expressive a krathong can be. 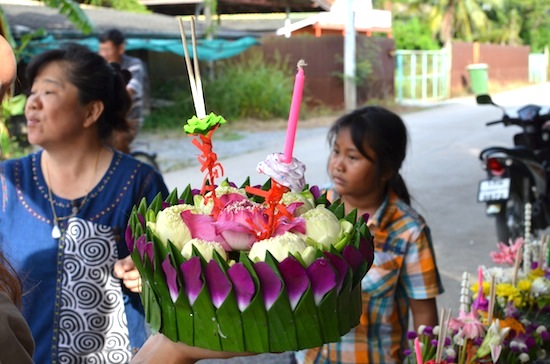 One rule: they have to be colourful.

The average krathong includes a single candle, incense, flowers and coins, all offerings to the river goddess, nagas, Buddha and anyone else you care to include. A strand of hair or nail clippings is sometimes added to symbolise a relinquishing of negativity and bad luck. Some krathong are nothing more than a single lotus bud with a candle; others look more like floating wedding cakes.

Krathong can be purchased on the streets in any town or city in Thailand throughout the festival. Before letting it go, Thais typically hold it up to their foreheads while silently making a wish or reciting a prayer. The Thai word loy means "to float," and it's believed that your wish will come true only if the candle stays lit until it disappears out of sight. If it sinks right after leaving your hands, well, better luck next year.

Yi Peng
Rooted in the ancient Lanna kingdom, Yi Peng is celebrated alongside Loy Krathong in Northern Thailand. The term (also spelt yee peng) means "second month" since, according to the Lanna calendar, this is the full moon of the second lunar month. The most eye-catching feature is khom loy, metre-tall paper lanterns -- essentially mini hot-air balloons, also known as sky lanterns -- that light up the sky in great numbers during the festival. Even greater numbers than this!

Also thought to relieve bad luck, Northern Thais offer khom loy to a crystal chedi believed to be situated high above the earth in a heaven realm. Made of (somewhat) fire-resistant paper, the amazingly sturdy crafts often float high into the atmosphere. An annual event just outside of Chiang Mai is known for its simultaneous launch of thousands of khom loy, a spectacular sight that's widely photographed.

Though Yi Peng is traditionally a Northern Thai festival while Loy Krathong derives from Central Thailand, they're now more like two sides of the same coin. In recent years, Thai authorities outlawed khom loy due to the threat they pose to airliners, but an exception is made for Chiang Mai on Loy Krathong night and many people still release them elsewhere. It's like being surrounded by Christmas lights -- if the lights were alive and floating in all directions.

Where and when
It comes as no surprise that the presumed birthplace of Loy Krathong, Sukhothai, remains one of the best places to experience it. The festival runs for four days, including an elaborate beauty contest, parade, folk music performances and light and sound shows at Wat Mahathat, one of the area's more magnificent 800-year-old sets of ruins. Sukhothai is not a big city; accommodation reservations are essential. Wat Mahathat: imagine it bathed in light and music.

Chiang Mai is the go-to venue for Yi Peng, with a mass (ticketed) khom loy release taking place at the Lanna Dhutanka grounds, 13 kilometres outside of the city near Mae Jo University. This is put on by a Buddhist sect, not the government. Khom loy are also launched in Chiang Mai city on Loy Krathong night, but with no simultaneous mass release.

In Chiang Mai city itself, festivities are centred at Saphan Nophawat Bridge, which we've heard gets crowded with young firecracker-shooting revellers. For a tamer and more spiritual atmosphere, head to Wat Chai Mongkhol, Wat Pan Tao or Wat Chedi Luang. A parade will begin at Tha Pae Gate on the first night, with beauty pageant contestants carried through the streets on traditional palanquins. For more info, Chiang Mai Best is a good resource. 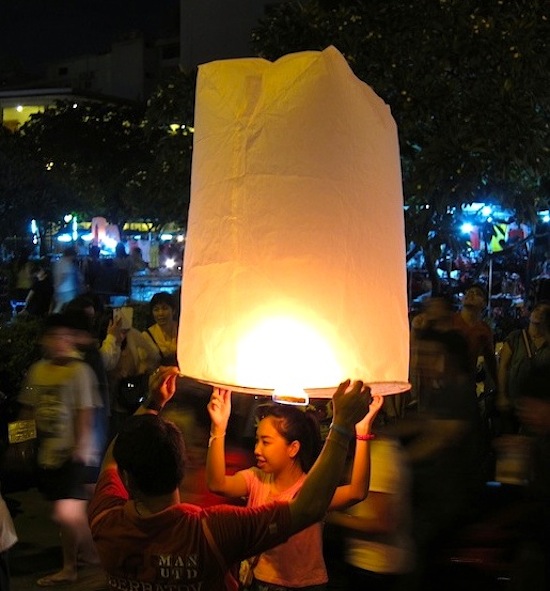 Bangkok greets Loy Krathong with several fireworks displays, temple fairs and an overall raucous atmosphere. Wat Arun and Wat Yannawa are both good options for floating your krathong down the Chao Phraya. Asiatique puts on a large fireworks display to go with live music. Memorial Bridge (aka Saphan Phut) is a fine place to watch the illuminated boats drift past while sending off a khom loy or two.

If you can't make it up to Sukhothai, Thailand's other historic royal capital, Ayutthaya, is a decent alternative. Illuminated boats will cruise the trio of rivers that surround this 650-year-old city and its historical park, with cultural performances scheduled in front of the National Museum and Queen Suriyothai Monument. North of Ayutthaya, the riverside city of Suphanburi is known for an especially festive time that draws next to no foreign tourists. If you think Sukhothai might be too played out, nearby Tak has its own take that includes the launching of 1,000 krathong simultaneously on the Ping River.

Closer to Bangkok, the historic town of Amphawa holds its own unique version, complete with large-scale folk theatre performances next to the Mae Khlong River. If you're down in Southern Thailand, Phuket's west coast beaches and Nai Harn Lake will be aglow with krathong, with lively local parties at Saphan Hin and Suan Luang parks.

Loy Krathong is celebrated in some way practically anywhere there's a body of water in the kingdom, from the Mekong River towns in upcountry Northeast Thailand to the islands that dot the Andaman Sea. If you happen to be in Laos, check out the related festival there.