Vantage point for Thailand’s earliest sunrise, a vast shale cliff overlooks the forested hills of Laos stretching beyond the Mekong River. On its base, a long series of paintings hint at what life was like here some 3,000 years ago. Also containing strange rock formations, fantastic waterfalls and fields of wildflowers, Pha Taem National Park packs a lot into its 340 square kilometres.

The park covers a rocky plateau gently rising from the west covered in dry dipterocarp forest, which culminates in sheer cliffs dropping down into the narrow Mekong valley. Displaying a fair amount of information on the park’s natural and historical background, the visitor centre sits near the cliff’s edge in front of a bumpy car park paved by mother nature.

From here visitors can walk right up to the cliffside to enjoy the view. Keep small children close at hand here; no guardrails stand between you and the edge of a 160-metre drop. A nearby trailhead gives way to a few concrete steps leading to the base of the park’s namesake cliff: Pha Taem, which translates as “cliff painting”.

The scenic and relatively easy trail runs along the foot of the overhanging cliff, passing five painting sites spread along 1.5 kilometres before climbing back to the cliff top. From here another 1.5 kilometres of easy track takes you across the plateau and back to the car park. Wooden viewing platforms are set up in front of the paintings, which are guarded by an outcrop of barbed wire to stop anyone from adding more modern graffiti.

While the paintings are thought to be around 3,000 years old, no one is exactly sure. Anywhere between 1,000 and 4,000 years is plausible, and the art was probably added gradually over a lengthy period of time. The artists are thought to have used palm leaves to apply the natural paints, mostly red but also with some black and white. Much of the cliff face overhangs, sometimes dramatically, as softer shales compose the lower strata that are capped by less easily eroded sandstone.

Many of the images are remarkably well preserved and you can clearly make out depictions of giant Mekong catfish, elephants, turtles and triangular headed aliens. There are also handprints, abstract designs and geometric paintings that are thought to depict paddy. The paintings seem to tell a story as you move north, beginning with life-size animal figures and eventually displaying fish traps that might have been a major technological advancement at the time.

It can be a hot and badly shaded path during the dry season but in the rainy months it comes to life with a multitude of wildflowers, including orchids clinging to the trees. If you look close to the ground you may be lucky enough to find the carnivorous, insect-eating honey-dew flower. The lower section of trail is also very good for spotting bird-life, and the view over to Laos sticks with you for most of the hike.

Just up the road from the visitor centre, a cluster of towering mushroom-shaped rock formations known as Sao Chaliang are also worth a stop. While these are the most easily accessed, you’ll find similar formations at various places on the plateau, and up at Phu Pha Thoep National Park in Mukdahan.

Many visitors head back to Khong Chiam or Ubon Ratchathani after seeing the cliff paintings and mushroom rocks, but those with more time should not miss the waterfalls located further north off Highway 2112. The first is Soie Sawan, reachable after a short walk from a car park where a few food vendors set up on weekends.

Stairs take you down to a rock basin sheltered by a series of cliffs, where water tumbles from two different places. One set of falls drops from atop a 25-metre-high overhang to resemble a giant’s shower, while the other flows smoothly down a continuous rock face. When the water level is high enough you can shove onto a natural slide and splash into a deep pool. Those who don’t feel like navigating the steps can view the falls from a perch up above. From here the trail continues to a vast meadow that brims with wildflowers in the dry months.

Next up you have one of Thailand’s more distinctive waterfalls, Saeng Chan, which tumbles through a hole in an overhang of rock coloured orange and olive green from fungi. The name means “moonlight waterfall” because it’s supposedly best viewed under the light of the moon. Another recommended viewing time is just before noon, when the sun hits the hole at the same angle as the falling water, causing each drop to appear like a shimmering ball of sunlight.

The northernmost of Pha Taem’s three waterfalls is Thung Na Muang, accessed by steep stairs that pass by the “giant reacher” roots of an ancient dipterocarp tree. The angelic falls cascade over high-rounded rocks in two streams, crashing into a pileup of boulders which must be traversed before you can get wet. No pools are deep enough for a swim, but you can climb down to a rocky nock that puts you behind the falls.

The same network of side roads that runs to Saeng Chan and Thung Na Muang waterfalls also accesses the clifftop viewpoint, Pha Chanadai, which is the place to be if you want to be the first in Thailand to watch the sun rise. Pha Taem cliff is only a minute behind, so don’t feel too bad if you settle on taking it in from there.

To avoid disappointment, keep in mind that Saeng Chan completely dries up from around February to July. Soie Sawan can also look more like a leaky faucet at this time, but at least a narrow stream of water falls at Thung Na Muang for most of the year.

If organising a trip to Pha Taem through one of the local Khong Chiam guesthouses or an agent in Ubon Ratchathani, it’s worth asking about the possible return by boat down the Mekong—if you’re lucky staff at the visitor centre may be able to help. You would need transport for the few kilometres to the small village on the riverbank, where boats charge 1,000 to 1,500 baht for an hour-long cruise downstream to Khong Chiam.

Pha Taem National Park’s visitor centre is located 25 km north of Khong Chiam and 95 km east of Ubon Ratchathani. Public transport does not run to the park, so you’ll need to hire your own wheels or go as part of a tour.

In Khong Chiam, a car can be arranged through Ban Mongkhon and the driver charges a very reasonable 500 baht fee to take up to four people to the Pha Taem cliff paintings and Sao Chaliang, with the price going up from there for each waterfall. If going with this option you must also pay for gas and the national park fees yourself. A tuk tuk in Khong Chiam quoted us 1,200 baht for a round trip to Pha Taem cliff and Soie Sawan waterfall.

Back in Ubon Ratchathani, a taxi driver quoted us 2,500 baht for a full-day round trip to the national park, including waterfalls. You may score a cheaper rate through a hotel.

If going on your own steam, take Highway 2134 north out of Khong Chiam (you’ll have to pass through the town even if coming from Ubon city) and then follow signs for the park onto Highway 2112. The park’s main section with the visitor centre and cliff paintings is clearly marked by signs and reached after a few km on the access road.

To reach the waterfalls, head back to Highway 2112, continue north and be on the lookout for signs. The sign for Soie Sawan is obvious after around 15 km on the right, and then it’s another five or so km to the car park. Back on 2112, keep north for another 12 or so km and you’ll see brown signs pointing right to Saeng Chan and Thung Na Muang waterfalls. Not long after that right, another sign points right again to put you on a bumpy side road that continues south for 10 km until one sign points straight to Thung Na Muang and another points right to Saeng Chan. Another sign points west to Pha Chanadai.

The entry fee for foreign adults is 400 baht. Tickets are generally required to see Soie Sawan and Saeng Chan waterfalls along with Pha Taem cliff and Sao Chaliang. If there’s enough time after hitting those, you might continue north up 2112 to Sam Phan Bok. 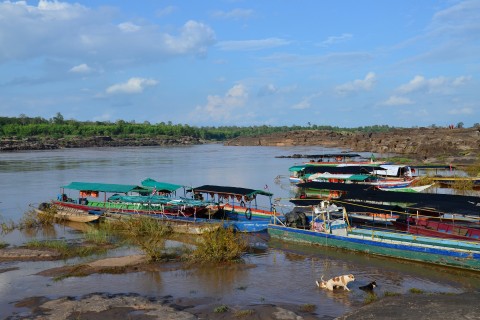 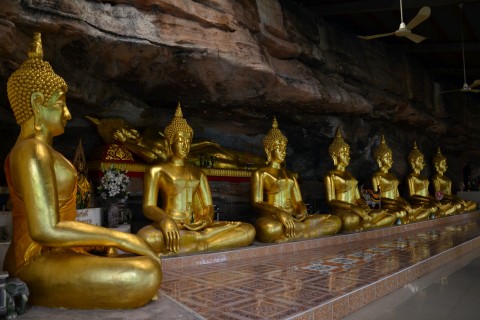 The crown of Khong Chiam 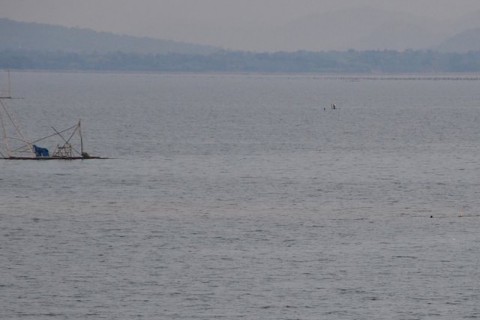 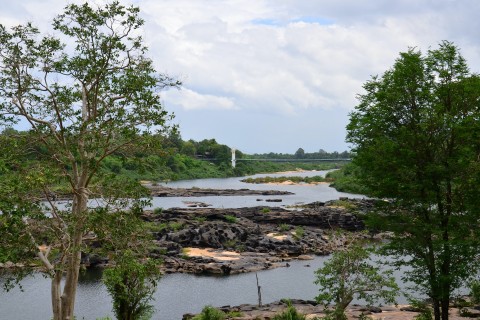