It can seem counterintuitive to do a food tour in a city with as much food in your face as Bangkok, but a tour with Chin from Chili Paste Tours, can be a terrific way for both the novice and the more experienced street food eater, to get more than just an extra kilo out of their eating time in the Thai capital.

Booking a food tour in Bangkok is a bit of a forest and the trees moment — rivalled perhaps only by Saigon for its population’s dedication to stuffing their faces day in, day out, the Thai capital offers a near inexplicable variety of food worth trying. So, when I was in Bangkok recently, I made an appointment to meet up with the founder of Chili Paste Tour, Chinnapatt (Chin) Chongthong, to eat our way through Bangkok’s old centre. Chin originally harks from Ubon Ratchathani in Thailand’s far northeast but now calls Bangkok home. She loves food.

Just a quick disclosure. Chin is the partner of our Bangkok-based writer, David Luekens. I did my utmost to hide my identity while booking the tour, but, thanks to Google adding my mugshot to my alternative email address (without my knowledge I should say!), I was sprung before we even met at Krung Thonburi BTS. So this tour was not undertaken on an anonymous basis. We paid the standard 2,500 baht for a private tour with Chin.

From the BTS station we got a cab across town to kick off at Old Town Cafe Bangkok, a trendy “new made old”-style coffee house where we grabbed a coffee and Chin talked me through what the food tour would entail. Primarily a lot of scoffing, but we’d fit in a temple and a few other cultural points of interest along the way. While we’d mostly be walking, there’d be a couple of tuk tuk rides in between to get us to the next dish a little more quickly.

The factory is classified.

Our next stop a short walk away was unexpected. Mr Lakut Suwanprasob has been cooking up his version of the famously spicy Sri Racha sauce since 1932 in a small backyard “factory”. The factory was little more than a large, covered, bubbling wok, but he wouldn’t let us too close, and while Mr Suwanprasob was happy to pose for a photo, absolutely no photographs of his factory were allowed — trade secrets and all that. We picked up a bottle for just 17 baht but unfortunately airport customs confiscated it — we guess it really is as spicy as he said.

Not a ribeye in sight.

Just around the corner, we weighed in at Mong Rachabophit, a bustling shopfront eatery known for its tom krang nai wua — or beef offal soup. In business for more than 50 years, the current owner inherited the restaurant from his father and was doing a roaring trade when we dropped by — so much so we had to wait a good 15 minutes for a seat. Best described as beef soup with all the bits you wouldn’t generally think to eat, the broth is rich and hearty and, well, there’s nothing quite like the texture of a cow’s intestine in the morning. The older customers tend to go for a small shot of chong kung (whiskey) alongside the soup and as I’ve never quite managed to stomach (geddit) the appeal of offal I can see where they’re coming from.

The farang won’t eat this will he?

The restaurant is named after nearby Wat Rachabophit, one of Bangkok’s prettiest temples, and is also a short walk from our next stop, Trok Mor wet market. In business for more than a century, the market is the heart of the community here, with everything from staples to breakfast, lunch and even block ice being prepared and sold. We started with some coconut shavings on tapioca at the top end and finished at the other with a small sampling of haw mok het (lightly curried mushrooms steamed in banana leaf) and a skull-sized iced coffee with lashings of condensed milk. All the way though, Chin’s rapport with the vendors was obvious — chim chim (tasting) here, sup sip (gossip) there the whole way through. Aside from the scoffing, a good guide like Chin gives an inside line on the locals, opening the smallest of windows into their lives, and turning what is really just a stroll down a wet market into something much more memorable and enjoyable.

Suitably caffeinated, we took a hard right and made our way down a narrow soi to Mo Waan, a herbal and traditional medicine dispensary that dates back to the 1920s. While they’ve lost a bit of trade thanks to the growing popularity of Western medicine, this is where you want to head for a more eclectic collection of tonics, cordials, pills and potions. A handy brochure details some of the more popular concoctions – those with a long bus ride ahead may be interested in yahom prajakara, which brings together the healing and restorative powers of ginger, borneal, civet and saffron to tackle the serious issue of flatulence (well, that’s what it says on the brochure).

We continued our food intermission with meandering visits to the grandiose Wat Suthat – where Chin and I each bought and signed a roof tile for an ongoing roof replacement — and then to Baan Bat monk bowl village where a trio were beating the living hell out of brass to fashion beautiful monk bowls (which are available for sale).

Make all your offerings for weight-loss here.

From here it was a quick tuk tuk zoom to Nang Leong market, one of Bangkok’s older remaining markets. We chim chimed some delicious pork satay on the way in then settled in for one of the highlights of the day, a simply gorgeous yam makua (smoked eggplant salad) garnished with prawns and enough spice to stir the dead, washed down with a fresh mango shake.

We were not done with the market though. I’d mentioned earlier to Chin I was a fan of duck and so we beelined it to Sor Roong Roj where we sat down to a hot plate of ped pad cha — stir-fired roasted duck with basil and peppercorns. While we had a plate of chu chee pla chon (snakehead fish with red curry paste) on the side, the duck really stole the show. Afterwards, we strolled around the market and the centre has a great selection of desserts and also many turmeric-laden Southern Thai dry curries. I only had a tiny taste of these, but it was obvious there was plenty more worth sampling for my next visit to the market.

Lower centre: Eat all of it.

This much eating down, a walk was in order, which took us past a large deep-fried banana joint whose OHS left, well, a bit to be desired. Out front an industrious crew of Burmese and Khmer workers waited for more fist-sized servings of bananas in paper bags, which they then carted off to sell to motorists stranded on Bangkok’s traffic-clogged streets. They make five baht commission per bag sold and one Chin chatted to had sold 70 bags that morning. 350 baht for a half-day of work may not sound like much, but the legal stature of these banana sellers was unclear and even at 350 baht they’re already earning above the official minimum wage of 300 baht per day.

Where all of Bangkok’s bananas come to die.

We then jumped into the traffic ourselves, back into a tuk tuk for our penultimate stop at Krua Som Hom, just down from higher-profile Chote Chitr restaurant. We are the only diners at Krua Som Hom, which is a good thing as nobody is there to hear me groan at the news that there are three more dishes on the way. Plaa goong — a very popular (and delicious) shrimp salad comes first, then after a slight pause, a double whammy threatens to bring on my food coma: khai hua takrai (chicken with lemongrass) and pla tod samun prai (deep-fried fish with herbs). The food is great, and the deep-fried fish in particular, almost candied, is noteworthy.

By now my eating has slowed to a crawl, but Chin is still chatting away talking Thai food history and culture and also, most interestingly, about the families whose food we’ve been eating through the day. When I push my plate back in resignation she brings her hands together and exclaims okay, excellent, let’s get some ice cream!

Nuttaporn Ice Cream sits only 50 metres away so I’m able to stagger over there for our final dish of the day. Four scoops of crisp frosty chocolate ice-cream are slowly eaten under a streetside umbrella as Bangkok’s monsoon rains close in overhead.

More information
Chin offers a range of both individual food tours of Bangkok and group tours. Tours start at 1,800 baht per person — see the Chili Paste website for full pricing information. Reservations in advance are recommended, especially in high season. I’m no novice when it comes to Thai food, but I found the tour to be thoroughly excellent and outstanding value — my sole piece of advice to Chin was to increase her price! Highly recommended.

Stuart McDonald co-founded Travelfish.org with Samantha Brown in 2004. He has lived in Thailand, Cambodia and Indonesia, where he worked as an under-paid, under-skilled language teacher, an embassy staffer, a newspaper web-site developer, freelancing and various other stuff. His favourite read is The Art of Travel by Alain de Botton.

Our top 10 other sights and activities in and around Bangkok

Great for art lovers and kids

Go on, it's good for you

Atmospheric with a rich history 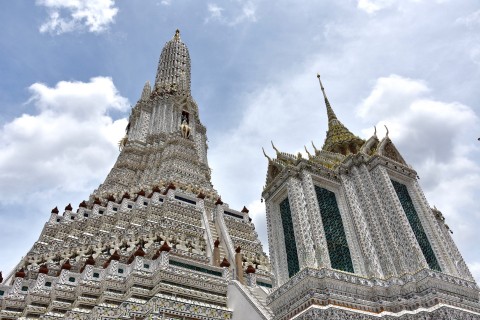 Temple of the dawn